The Pony Club was formed in 1929 in response to a growing interest in riding and the care of horses and ponies. It is now the largest association for riders in the world with over 110,000 members in more than 20 countries. At London 2012, 17 out of the 18 Team GB equestrian Olympians took home a medal and all but three of those medal winners started training through the Pony Club.

The objectives of the Pony Club are:

There are 374 branches for children who have their own ponies and approximately 500 riding schools running the Centre Membership Scheme in the UK.

Here at Kingston Riding Centre, we are proud to be a part of the Pony Club Centre Membership Scheme where children can join the Pony Club without the necessity of owning their own pony. This allows children to progress their riding and stable management knowledge through the structure laid down in the Pony Club.

For the Younger rider we have structured courses that cover stable management, care of the horse and the countryside and this allows members to gain Achievement Badges. There are over 40 badges that may be awarded and members are encouraged to collect as many as possible and sew them on their Pony Club sweatshirts.

For the more confident rider we also run the Pony Club Efficiency Tests. This is the structure around which the Pony Club Training is based. The tests begin at a basic level (E) and progress until they may exempt the members from being able to go on to various levels of professional qualification. These tests are internationally recognised standards of attainment and are also recognised by the British Horse Society. They can be used as the first stepping stones into entering qualifications within the horse industry.

The Pony Club format at Kingston Riding Centre is:

The riding standard for all levels of Pony Club at Kingston Riding Centre is walk/trot/canter. Any new members will need to complete the 8 week Kingston Riding Centre Helpers course and demonstrate that they are confident to ride in a group lesson enviroment before going onto the waiting list. Our Pony Club instructors will also assess any prospective member before they join. 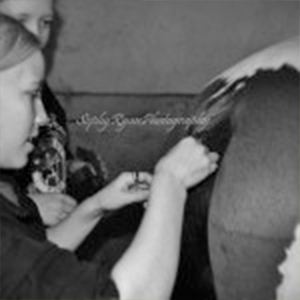 Alison and Amelia platting for their condition and turnout badge. 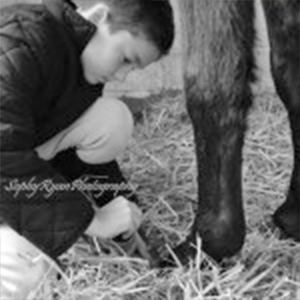 Francesco putting the finishing touches on before his condition and turnout badge.

Saskia getting her tack ready.

Over the past few years demand has grown and we now have four Pony Club groups with the possibility of needing to start a another novice group. We have an Advanced and Intermediate  club starting at 14:00 hours and a Novice club starting at 15:30 on Sundays and a mixed Advanced/Intermediate group on Saturday afternoons at 3:00.